In Memory
The Mid-Missouri Fisher House has many friends and generous donors.  Below we wish to honor those special people who have passed away. 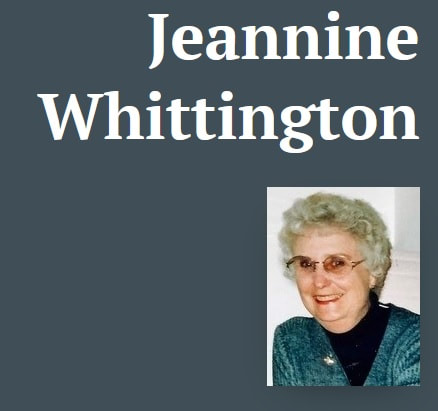 Jeannine Whittington, 92, of Boonville, Missouri, passed away on Sunday, October 24, 2021. No funeral services are planned. Family and friends will gather at a later date for a celebration of Jeannine's life and interment of ashes in Pryor, Oklahoma.
Jeannine was born and attended school in Tulsa, Oklahoma, where she later met and married Warren Killian. The couple had two children and remained lifelong friends, even after they dissolved their marriage. She married the great love of her life, Bob Whittington, in 1968, and the couple resided in Pryor, Oklahoma for most of their years together.
Jeannine was a talented amateur artist who dabbled in china painting, oil painting, and fiber arts. She and Bob enjoyed antiquing trips and discovered that the junkier the shop, the better the finds. They spent many happy hours reviving those antique pieces for use in their home. Jeannine was a gifted gardener, and she loved to bake. Her coconut meringue pies were the stuff of legend.
She is preceded in death by her husband, Bob, and her parents, Della Lawrence and Ona Harris. She is survived by son Dale Killian; daughter Sandy Selby (Marty); stepdaughter Cathy Pierce; half-brother Paul Harris (Sylvia); grandchildren Christy Beckett (James), Misty Killian, Adam Killian (Depheny), Shawn Killian (Missy), Beth Nease (Stephen), Catie Selby, Stephanie McAlvain (Coy) and Craig Pierce (Jodee); 14 great-grandchildren; one great-great-grandchild; numerous cousins and countless friends.
As the wife and mother of Navy veterans, Jeannine was an avid supporter of military veterans' causes and logged more than 1,000 volunteer hours at the Harry S. Truman Veterans' Hospital in Columbia, Missouri. The family suggests memorials to Mid-Missouri Fisher House, a facility that will provide accommodations for families of patients at the Truman Veterans' Hospital (P.O. Box 30681, Columbia, MO 65205-3681, or online at midmofisherhouse.org). 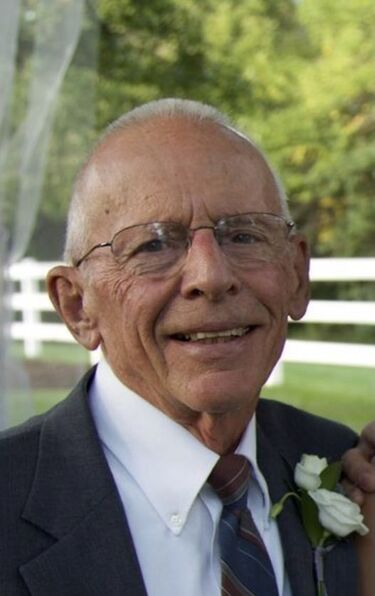 Richard Davis “Dick” Muzzy was born in St. Louis, MO on May 4th, 1935. He was married to and is survived by his wife of 64 years Nancy Maxine Bradshaw Muzzy. He is the father of their three children; Tom (Gail), Doug (Gina), Jane (Brian). He is the grandfather of nine; Allison (Jack), Clint (Hannah), Nicole (Andrew), Scott (Alayna), Trevor (Natalie), Jacob (Anna), Joshua, Matthew, and Rachel. And he is the Great Grandfather of three; Jack, Jolie, and Levi.
Dick graduated in 1957 from Missouri Valley College. Upon graduation, he was commissioned into the United States Marine Corp, earning his MBA in Public School administration during active duty, and retiring after 20 years in the reserves as a Lieutenant Colonel. Post USMC active duty he began a career in education; first as an elementary science teacher, then assistant Principal, retiring after 23 years as Principal of West Boulevard Elementary School. Upon retiring from Columbia Public Schools, he became a home builder and built a number of homes in Columbia and Alpine, CO.
Dick led a life of faith and service. Trinity Presbyterian deacon, United Church of Christ deacon, West Broadway Swim Club President, Kiwanis Club, American Red Cross blood donor with over 125 donations by age 70. He was also active in Habitat for Humanity.
He and Nancy enjoyed extensive travel in their trailer, summers at their home in Alpine winters at their home in Tucson, AZ, and fall and spring with many wonderful Columbia friends. His hobbies included woodworking and he was an avid golfer until he became “addicted” to Pickleball in which he remained active, at 86 years old, and until he could no longer attend.
Visitation will be at Broadway Christian Church, 2601 West Broadway, on Tuesday, August 24th, 2021 from 3:00pm to 4:00pm. A private family burial will take place immediately after.
Donations to Dick’s memory can be made to the Friends of Mid-MO Fisher House, at PO Box 30681, Columbia, MO 65205-3681. 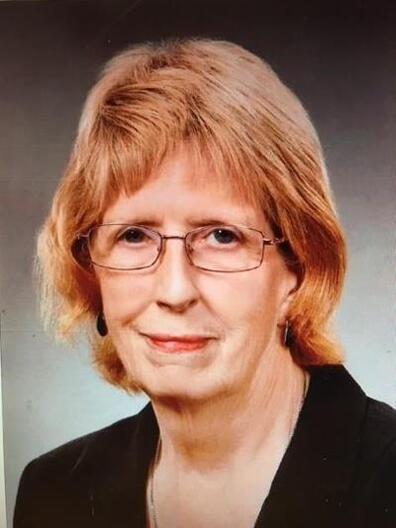 Shirley Carolyn Sanford, age 74, of Warsaw, Missouri, passed away at St. Luke’s Hospital in Kansas City, on Wednesday, August 21, 2019.  She was born in Washington, D.C. on August 19, 1945, the daughter of Ed and Virginia Arnold Crail.
When Carolyn was a child, the family moved to Kansas City.  She attended Center High School there and graduated in 1963.  She then went to Kansas State University where she was a member of the Gama Phi Beta sorority and graduated with a Bachelor’s Degree in 1967.  A week after she graduated college on May 28, 1967, she was united in marriage to Richard “Dick” Sanford.  Dick was in the service so they moved to Germany. After he was discharged, they moved back to Kansas City to raise their two boys.  Carolyn was a candy striper at the Trinity Lutheran Hospital in high school and college and when they returned to Kansas City, she went to work at the hospital full time.  She was also a cub scout den mother and busy in the boys activities and schools.  She worked at Trinity Lutheran for twenty-five years and retired from their in 1994.
​
After retiring, Carolyn and Dick moved to Warsaw.  They owned and operated the Captains Club until they sold it and she then worked for Farm Bureau Insurance. She was very active in the American Legion Post #217 Ladies Auxiliary where she was a past president.  She was also past president of the State of Missouri Ladies Auxiliary and was currently the president of the 7th District Ladies Auxiliary.  She attended the Warsaw Christian Church.

Carolyn was preceded in death by her parents and a brother, Bill Crail.  She is survived by her husband, Dick, of the home, two sons, Rick, and his wife Megan, of Overland Park, Kansas, and Davison, and his wife Amanda, of Raytown, Missouri, three beautiful granddaughters, Addie, Libby, and Raimee. She is also survived by a sister, Kathy Werner, of Charlotte, North Carolina, a brother, Jesse Auld, and his wife, Peggy, of Kansas City, several nieces and nephews, other relatives, and many friends.  ​
(573) 723-1092 | P.O.Box 30681, Columbia, MO 65205-3681
© 2020 Friends of Mid-Mo Fisher House. All Rights Reserved.