Help from our Supporters 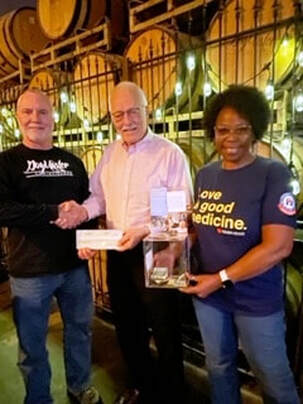 January 3, 2023:  Thanks so much to DogMaster Distillery for their recent fundraiser for the Friends of Mid-Missouri Fisher House, Inc. 10% of Navy Strength Gin sales from October 13 (birthday of U.S. Navy) to November 11, 2022 plus donations in our collection container. Pictured is Joe Pangborn with board members Sylvia Jackson and Stephen Gaither. 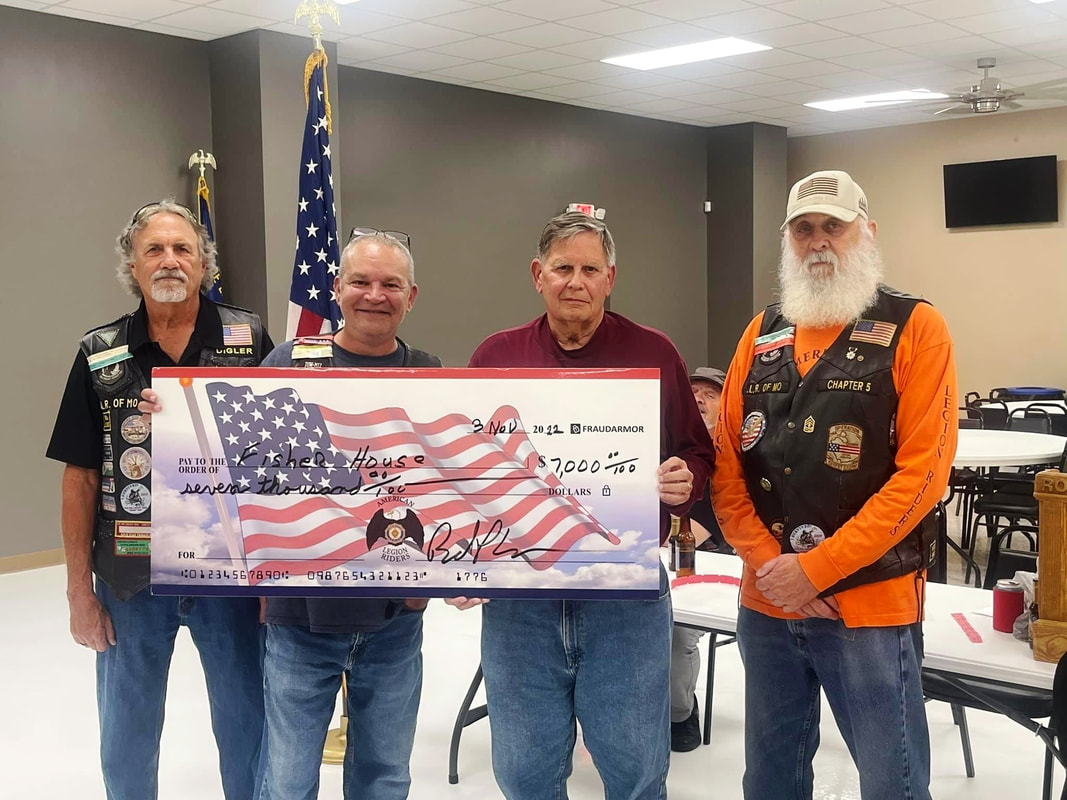 November 3, 2022:  A BIG thank you to the American Legion Riders Post 5 out of Jefferson City Missouri for their wonderful donation for the construction and support of "our" Fisher House. You all are AWESOME!! 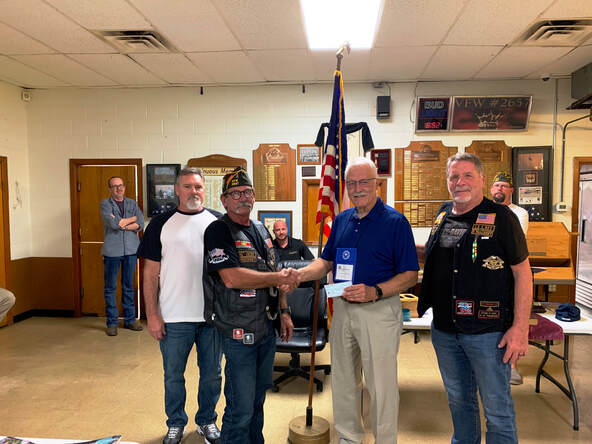 November 2, 2022:  Thank you VFW Riders from Post 2657 in Fulton Missouri for your hard work and generous donation!!! 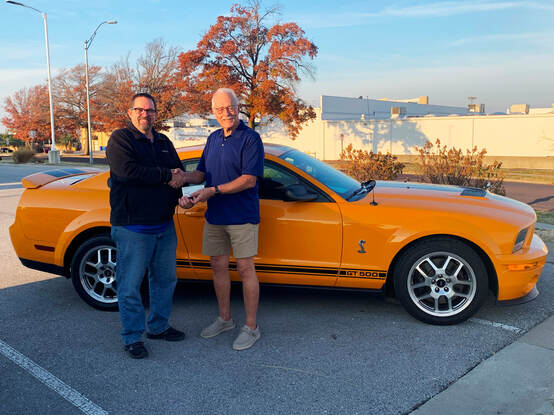 November 1, 2022:  We just received a very generous donation from the Central Missouri Mustang and Ford Club! This has been the third year that they have generously supported the Mid-Missouri Fisher House!! Thank you so very much!!! 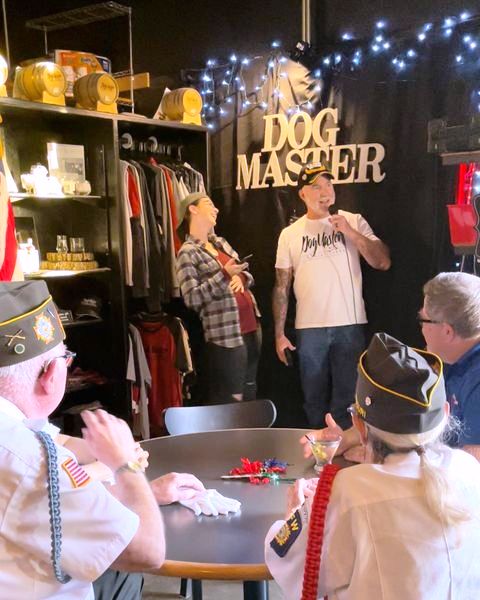 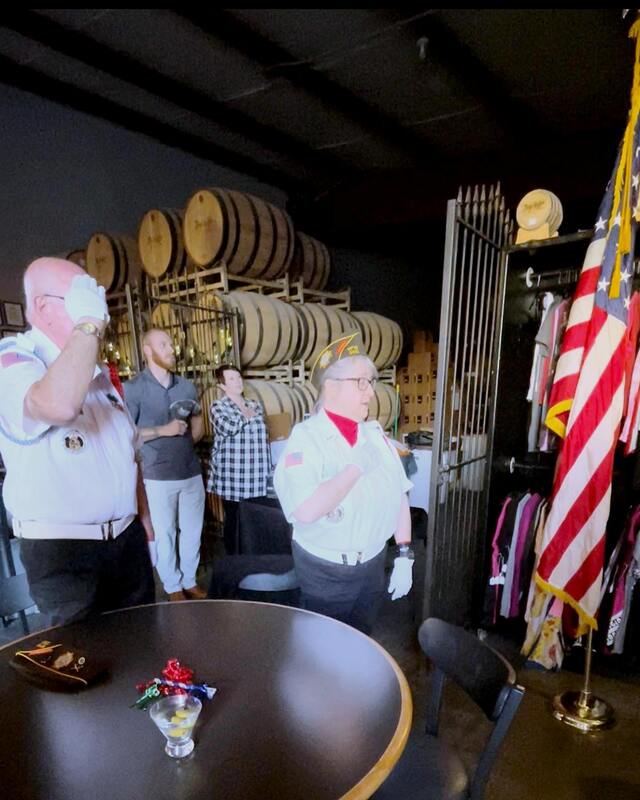 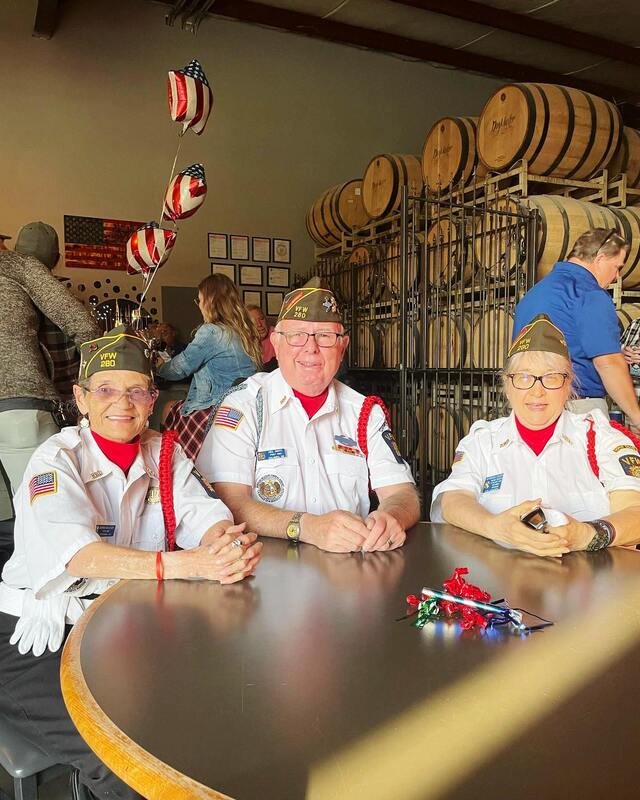 October 13, 2022:  We’re so grateful to everyone who turned out for tonight’s launch of our new Navy Strength Gin. Tonight also kicks off our campaign to support the Mid-Missouri Fisher House.  Through Veterans Day (November 11), 10% of Navy Strength Gin bottle sales will go toward the Mid-Missouri Fisher House — an organization that provides free housing to Military Families while their loved ones are treated in veterans hospitals.  Thank you DogMaster Distillery!!!
September 17 and 25, 2022: Great day for the annual SmokeFest sponsored by HogsHead Cigars & Fine Tobaccos in Hermann Missouri. We were there and all proceeds were generously donated to us by Colleen Murphy, owner of HogsHead to help construct "our" Fisher House just steps away from the front entrance to the Truman VA Hospital here in Columbia Missouri.  Thank you Colleen for your continued support! 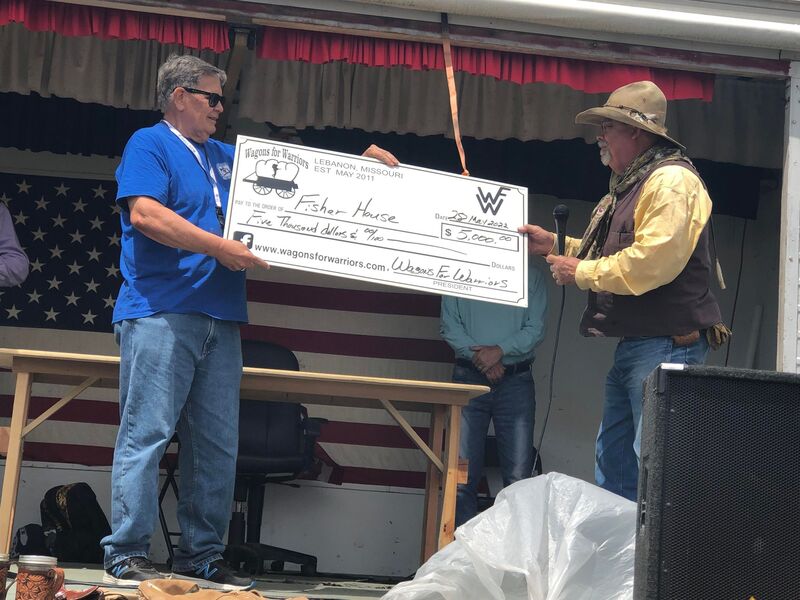 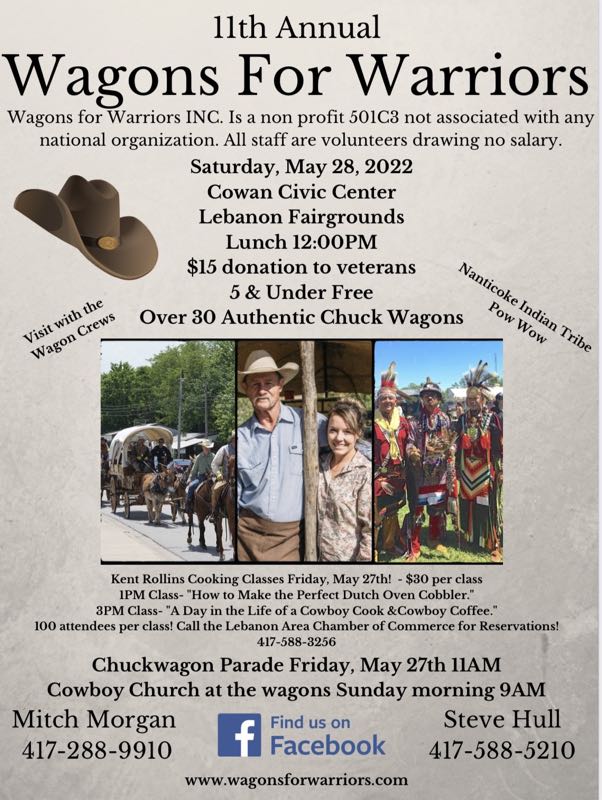 Wagons for Warriors is currently the largest gathering of chuck wagons in the United States, which also makes it the largest in the World. This event’s proceeds benefit local military men and women and veterans in need. Each year more than 30 chuck wagons and their crews from around Missouri and other parts of the United States come to Lebanon to cook and serve authentic Western cuisine. Visitors get the chance to eat the way cowboys did when the wagons were a vital part of daily life. We were honored to be one of many recipients of this event. Thank you very much Wagons for Warriors! 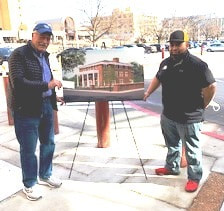 Each year Raphael Garcia, owner of Shomodjs DJ and Audio Rental presents a donation check to the Friends of Mid-Missouri Fisher House representing 10% of their revenue. In January 2022, we received his generous check for 2021! Thank you so very much for your continued support!!!! 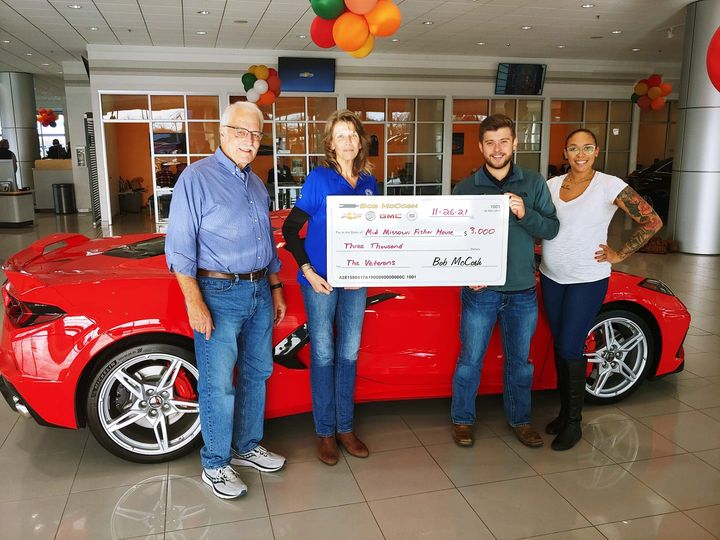 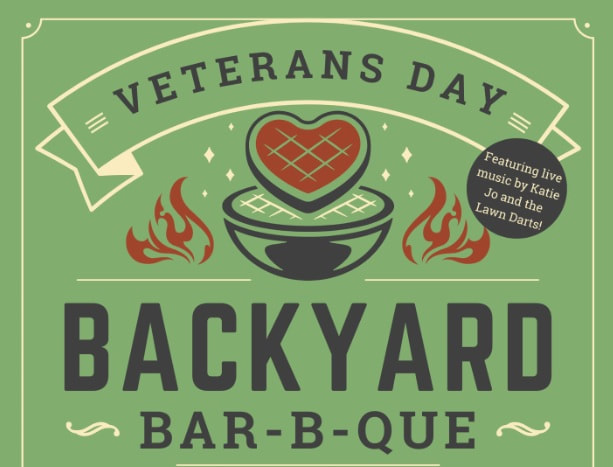 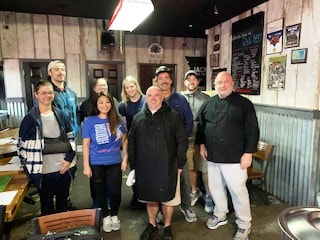 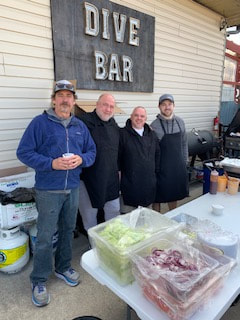 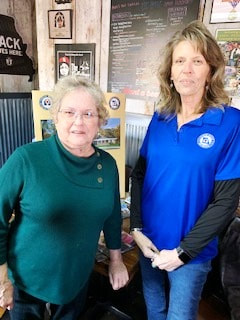 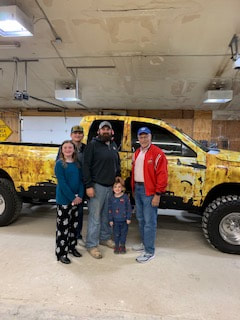 Cory Peck and his children presented a check in the amount of $2,174 to the Friends of Mid-Missouri Fisher House. The truck in the background is Cory’s competition pulling truck. Thank you Allied Forces for your generous donation!!! 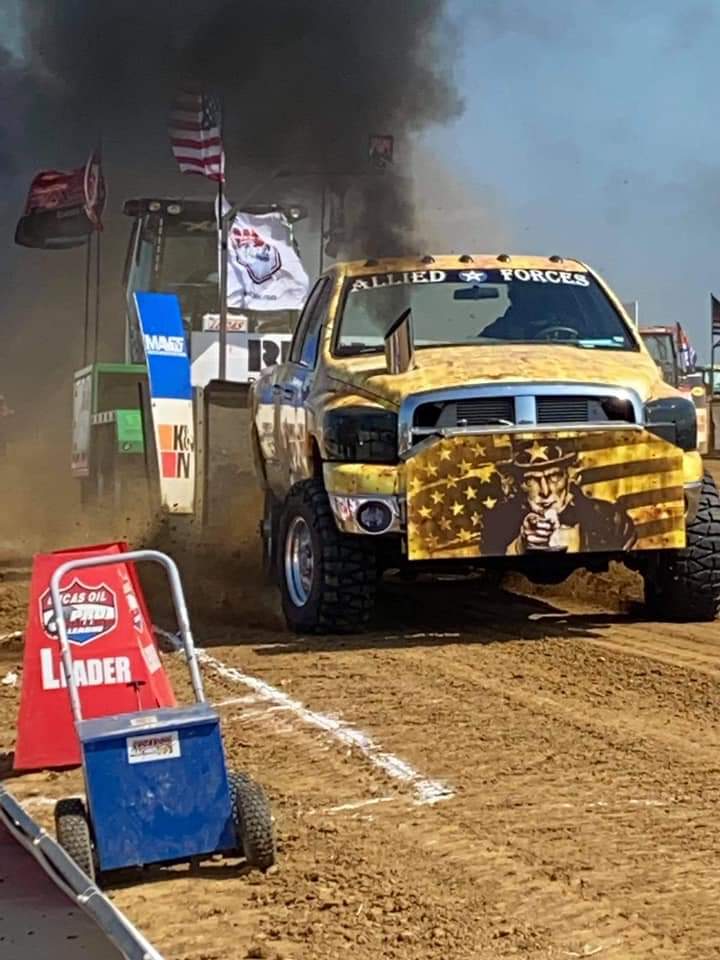 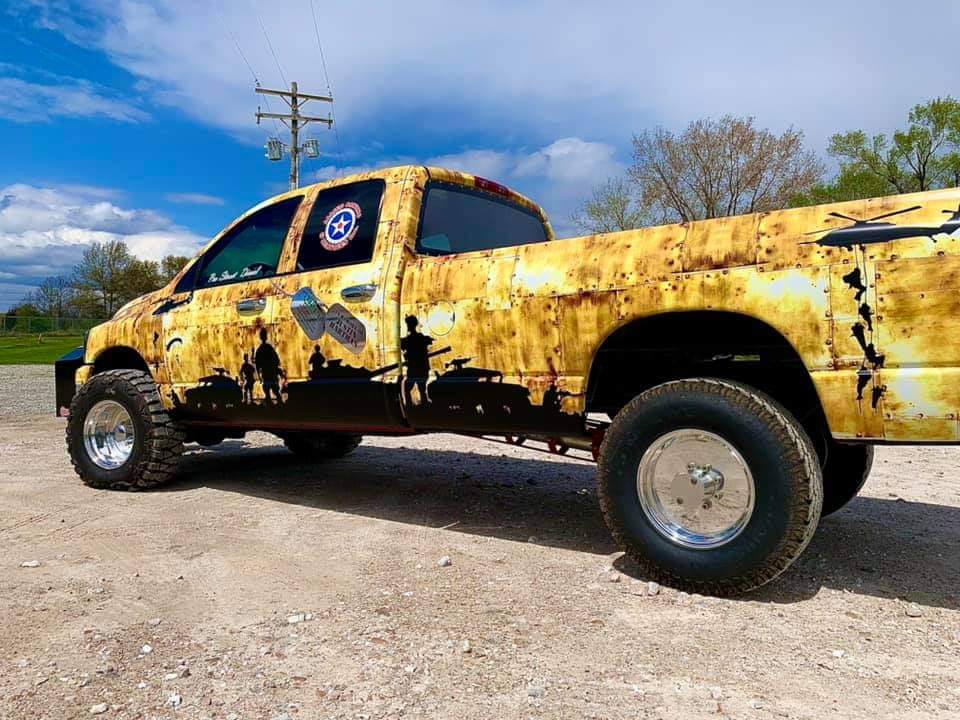 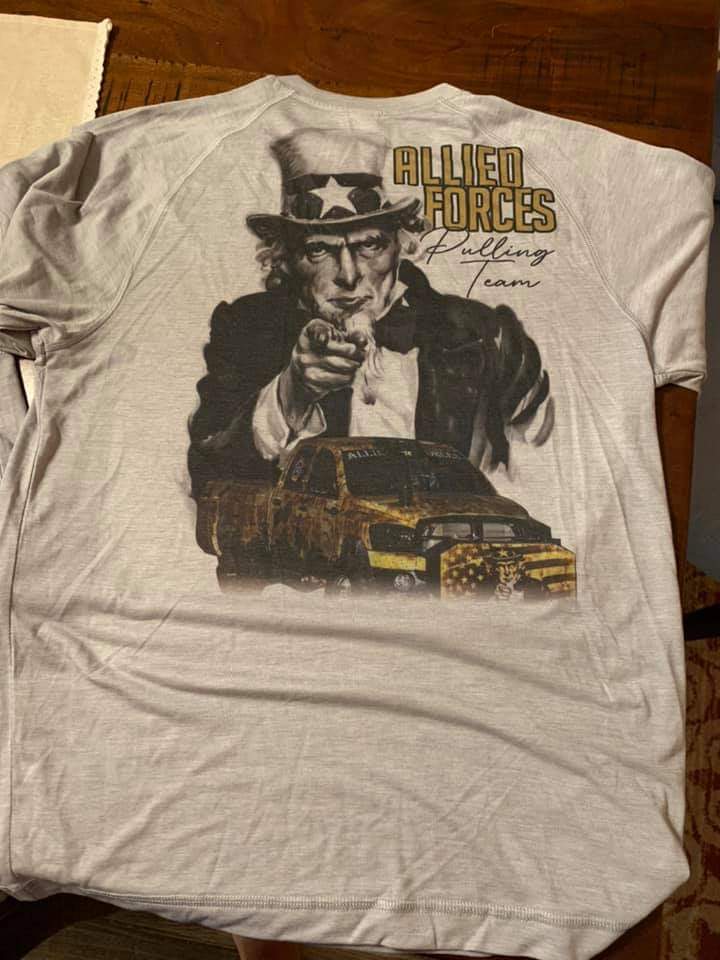 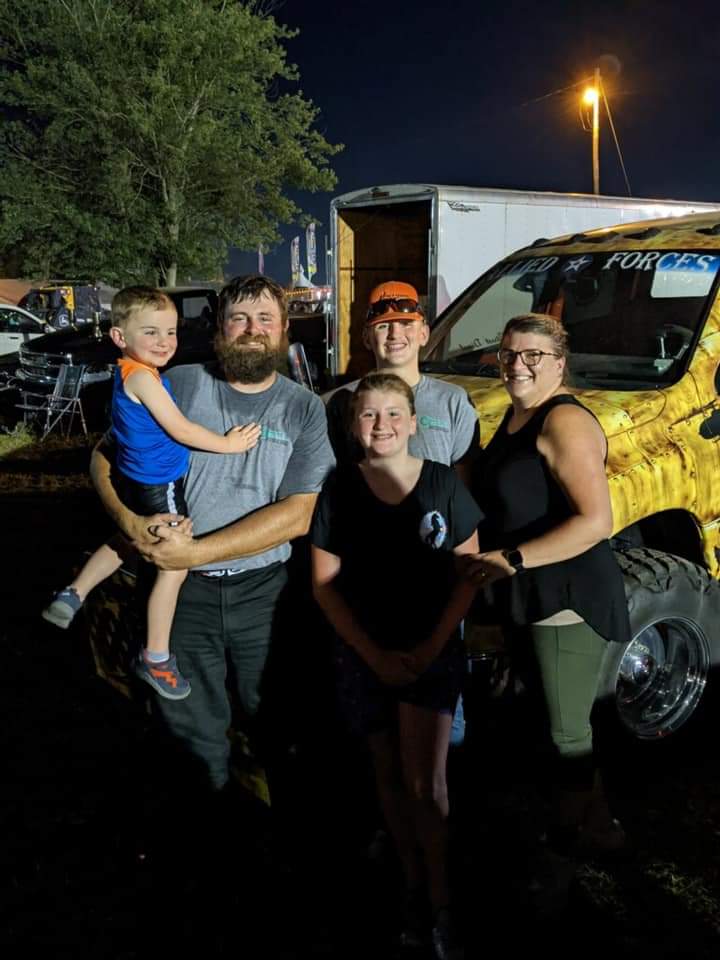 Note from Allied Forces:  "We own a pulling truck based out of Millersburg, Mo named Allied Forces. This truck is sponsored by Cory's concrete sawing company Allied Sawing and Services, Inc. out of Columbia, Mo. This truck is a tribute to all of our armed forces in gratitude  and  recognition that we would not be able enjoy the events and freedoms of truck pulling and all other daily activities if it wasn't for our military. We want to give back to the community through our t-shirt sales to specifically help fund the Fisher House to be built in Columbia, Mo.  This truck pulls throughout Missouri, Kansas, Iowa, and Indiana, and we have sold shirts all across the Midwest.

Although we are not members of the military we have many friends and family that are proud veterans and active servicemen and women. We see the difference family has in healing and mental health, as Sarah is a nurse and see this everyday.

Our family would love to be able to directly present the donation to Columbia location." 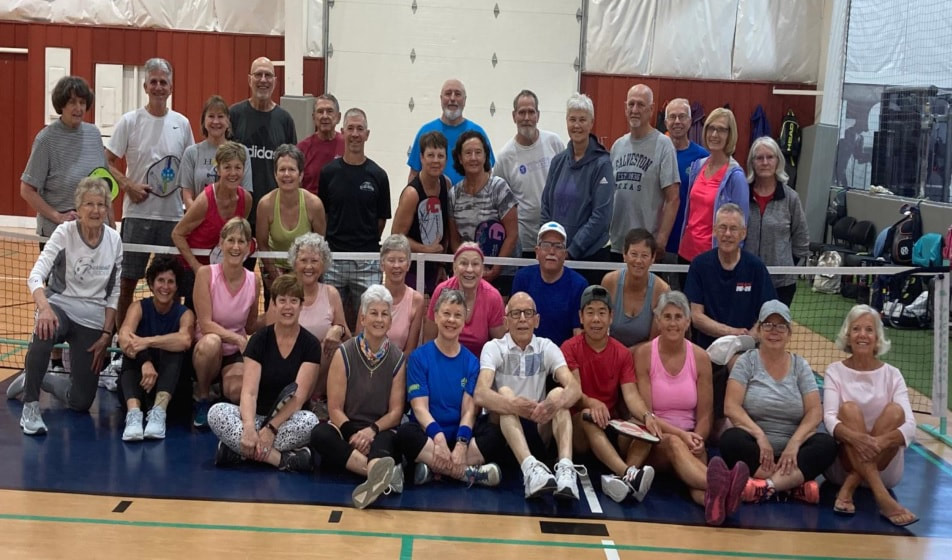 Richard Muzzy recently turned 86, and so his Pickleball team made a generous donation to the Friends of Mid-Missouri Fisher House in his honor. Dick served as a Marine and has been a long-time supporter of our efforts to bring a Fisher House to the campus of the Truman Memorial Veterans' Hospital here in Columbia Missouri. Over the years, he has constructed three AWESOME doll houses which we raffled off to help in our effort. Thank you Dick and thank you Pickleballers!!

We just received a very generous donation from the Orscheln Industries Foundation to help us build "our" Fisher House which will be located just a few steps from the main entrance of the Truman Memorial Veterans' Hospital here in Columbia Missouri. Thank you so very very much!!! 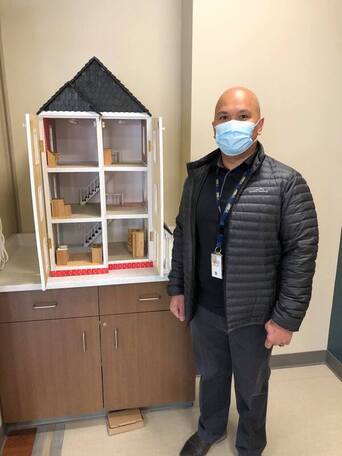 Congratulations to Ron Aradanas who was the lucky winner of our Doll House Raffle.  Thanks to everyone who purchased a ticket - your donations when to help build our Mid-Missouri Fisher House.
Central Missouri Mustang and Ford Club 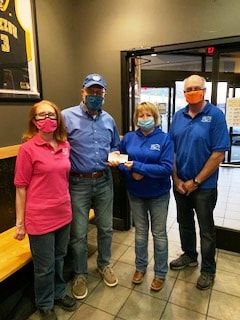 A BIG thank you to the Central Missouri Mustang and Ford Club for their $1,000 donation toward the construction of "our" Fisher House which will be located on the campus of the Truman Memorial Veterans' Hospital in Columbia Missouri.
Fred V. and Dorothy C. Heinkel Foundation 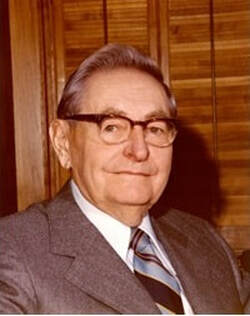 We are honored to have recently received a VERY generous grant from the Heinkel Foundation that will be used to help construct the Mid-Missiouri Fisher House.  Below is a little bit about Mr. Heinkel:

Fred V. Heinkel was president of the Missouri Farmers Association from 1940 to 1979. Throughout his life, he worked on behalf of farmers in Missouri and the United States.
During Heinkel's presidency, MFA grew to become a large and successful business involved in all aspects of agriculture. Heinkel oversaw the expansion of the cooperative and led it through several reorganizations. Between 1940 and 1979, MFA's membership grew from approximately 32,000 to over 175,000 and its annual income grew from $100,000 to $725 million. MFA's associated businesses, like MFA Oil and MFA Insurance (now Shelter Insurance) companies, also grew. MFA soon became one of the most successful farmers' cooperatives in the United States.

Heinkel did not marry until 1946, when he was almost fifty years old. His wife, Dorothy C. Hart Riley, was a schoolteacher.
Because of his expertise and political connections, Heinkel was often called upon to work with politicians and other agricultural leaders on issues of state and national importance. He served on many government-related committees, including the University of Missouri Board of Curators, the National Advisory Commission on Food and Fiber, and the Peace Corps National Advisory Council. He also served on committees that studied methods of insect and plant disease control and researched plans for building dams and levees along the Missouri River to help control flooding and harness the river's power for electricity.

On October 31, 1990, Heinkel died at Boone Hospital Center in Columbia, Missouri, at the age of ninety-three. Dorothy Heinkel had died a few months before him. Though he had no children, Heinkel left a lasting legacy, helping to shape Missouri's rural landscape through both his political efforts and his business skills. In 2014 MFA celebrated its one hundredth year of operation. The cooperative continues to thrive in no small part due to Fred Heinkel's thirty-nine years of leadership.

November 23, 2020 - Today we received a gift of $1,000,000 from the employees of Veterans United located here in Columbia Missouri.  This very generous gift will move us closer to our local goal of $3,000,000 that will be used to build our "own" Fisher House on the campus of the Truman Memorial Veterans' Hospital.
Allen P. and Josephine B. Green Foundation 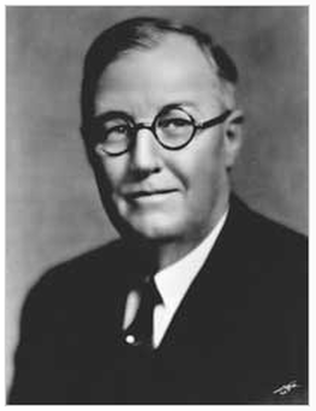 We are honored to have recently received a very generous grant from the Allen P. and Josephine B. Green Foundation for the construction of “our” Mid-Missouri Fisher House which will be located on the campus of the Truman Memorial Veterans' Hospital.

A. P. Green was a successful manufacturer who brought jobs and economic growth to Missouri. His fire brick business based in Mexico Missouri became a multimillion-dollar firm with branches all over the world. His refractory products contributed significantly to the largest period of industrial growth in United States history. They also played an essential role in the winning of two world wars and the massive rebuilding projects that took place afterward.

Another way to support Mid-Missouri Fisher House - help us win a grant by going to: https://acommunitythrives.mightycause.com/organization/Friends-Of-Mid-Missouri-Fisher-House

We hope that our friends, partners and supporters continue to be safe and healthy while we all cope with this pandemic.The recently enacted Coronavirus Aid, Relief, and Economic Security Act (CARES Act), which provides significant financial relief to businesses, hospitals, schools, and individuals, also directly affects nonprofit organizations. Specifically, the stimulus bill contains a one-time, above-the-line deduction for contributions of up to $300 made to qualifying charities. All taxpayers are eligible to take the deduction, even people who use the standard deduction.The incentive applies to charitable contributions made in 2020 and would be claimed on tax forms next year. The new deduction would not apply to noncash gifts or to gifts contributed to donor advised funds. Also, for the approximately eight percent of individual taxpayers who itemize their deductions, the CARES Act would suspend for 2020 the normal limit on deductions for contributions.For more information, please check the National Council of Nonprofits website at www.councilofnonprofits.org.
ZCAM Tools, LLC 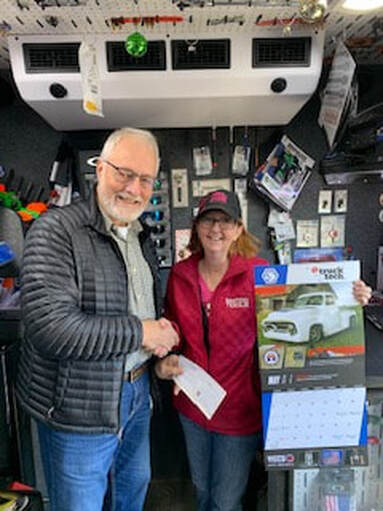 Cheryl Walker and Mark Adams are the local distributors for Matco Tools. They sell a Matco Tools calendar to their customers each year and this year, they donated the proceeds to benefit the Mid-Missouri Fisher House. Thank you, ZCAM Tools, LLC!
Lee’s Famous Recipe Chicken
Tigers Community Credit Union 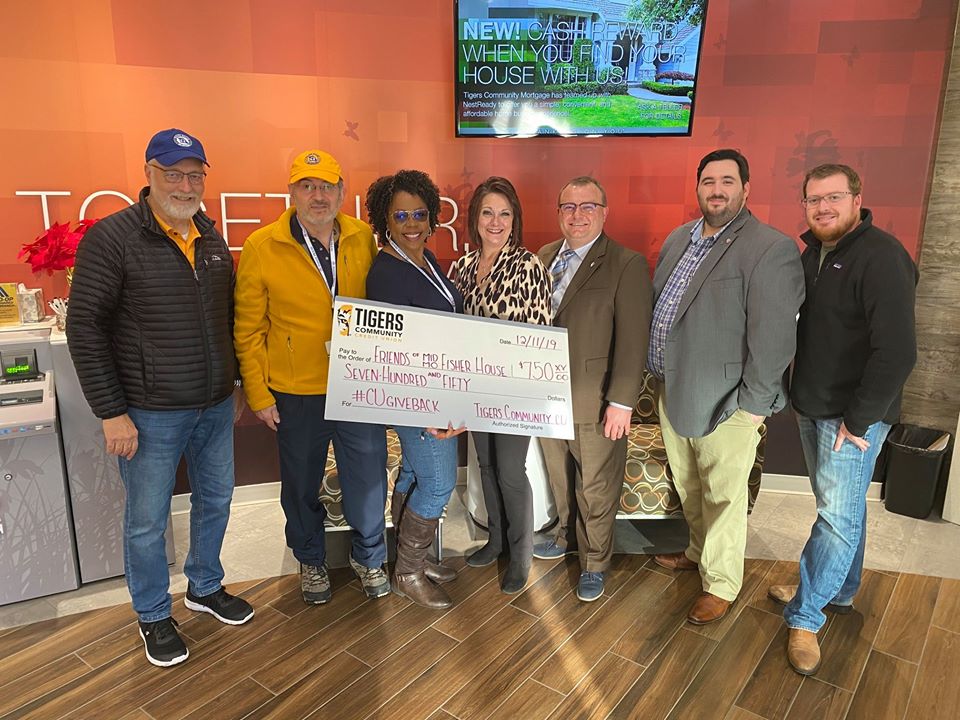